Elaine and I travelled to Sydney from 29 November through to 05 December in 2020. In a time when Covid-19 was a global pandemic, Australia was beginning to re-open its borders to its domestic States and Territories. Sydney opened up to the Northern Territory on 9 October 2020 and from that moment I was determined to get out of Darwin and restart my Traveling.

We previously visited Sydney in 2018 and we really enjoyed it. That time we only spent 3 days in the city and 3 days over in the Blue Mountains. This second time was just as good if not better. Although we stayed in the city we were able to stay in 3 different locations, spend time with friends and enjoy a variety of different cuisines. We are eager to go back there for the third time.

On our first 2 nights we stayed in the Meriton Suites in Kent Street. We booked the Altitude Suite with view of the cityscape. The apartment room was  spacious with 56m2 of wriggle room. It included kitchen, laundry facilities and most importantly a private balcony that overlooked the cityscape view. Our room was up on the 54th level.

The balcony was the best thing as a photographer. I was able to set up both my tripods and have my two cameras shooting in conjunction of one another. What made it awesome was that the balcony was private and I was able to work from less than 15 seconds from where I slept.

The cameras were both set on interval shooting, firing at 1 photograph per minute for 60 minutes. The Canon 5D4 was had the 24mm TSE lens  attached shooting horizontal and wide whilst the Fujifilm XT-2 shot vertical towards the skyscrapers with  the 16-55 2.8 Lens.

The sky for the first night was epic and was by far the best for the entire trip.

I had weigh down the tripod with a shoulder bag because it was getting rather windy up on the 54th Floor of the Meriton.
I was glad that bringing 2 tripods was an awesome idea.
Having 2 tripods and 2 cameras gave the opportunity to have 2 independent shots.
On top of Meriton Kent Street in Sydney, Australia

From night 3 to 5 we stayed in the Four Seasons Hotel in Circular Quay. This hotel had the primary photo that I wanted of Sydney and I opted for the premium King Deluxe room with the Harbour view, on the 32nd floor.

Unfortunately, The sky was never really 100% during our stay and we had to  contended with rain and ordinary cloudy days.

The area for shooting in the Four Seasons was also challenged with a small ledge and shooting through double glass windows. Fortunately I was prepared with a table top tripod and Platypod grip system.

Shooting through glass is challenging when you have less than clean windows that can not easily be cleaned, and light reflections from the room. Whilst shooting through glass the smallest light source from anything (mobile phone, light leak from under the door) can ruin your shots. Ideally you want to press up hard against the glass but that often restrict the composition.

Three hotels share the similar vantage point.  These are Four Seasons, Shangri-la, and Quay West.) I would think Quay West would be the best choice, because it seems they have private balconies.

Walking to the Circular Quay area to photograph the opera house was only 5 minutes walk from my hotel lobby.

You are able to capture the iconic Opera House from a variety of angles from this location. My favourite was from shooting across the Cruise ship pier at the back of the Customs terminal. 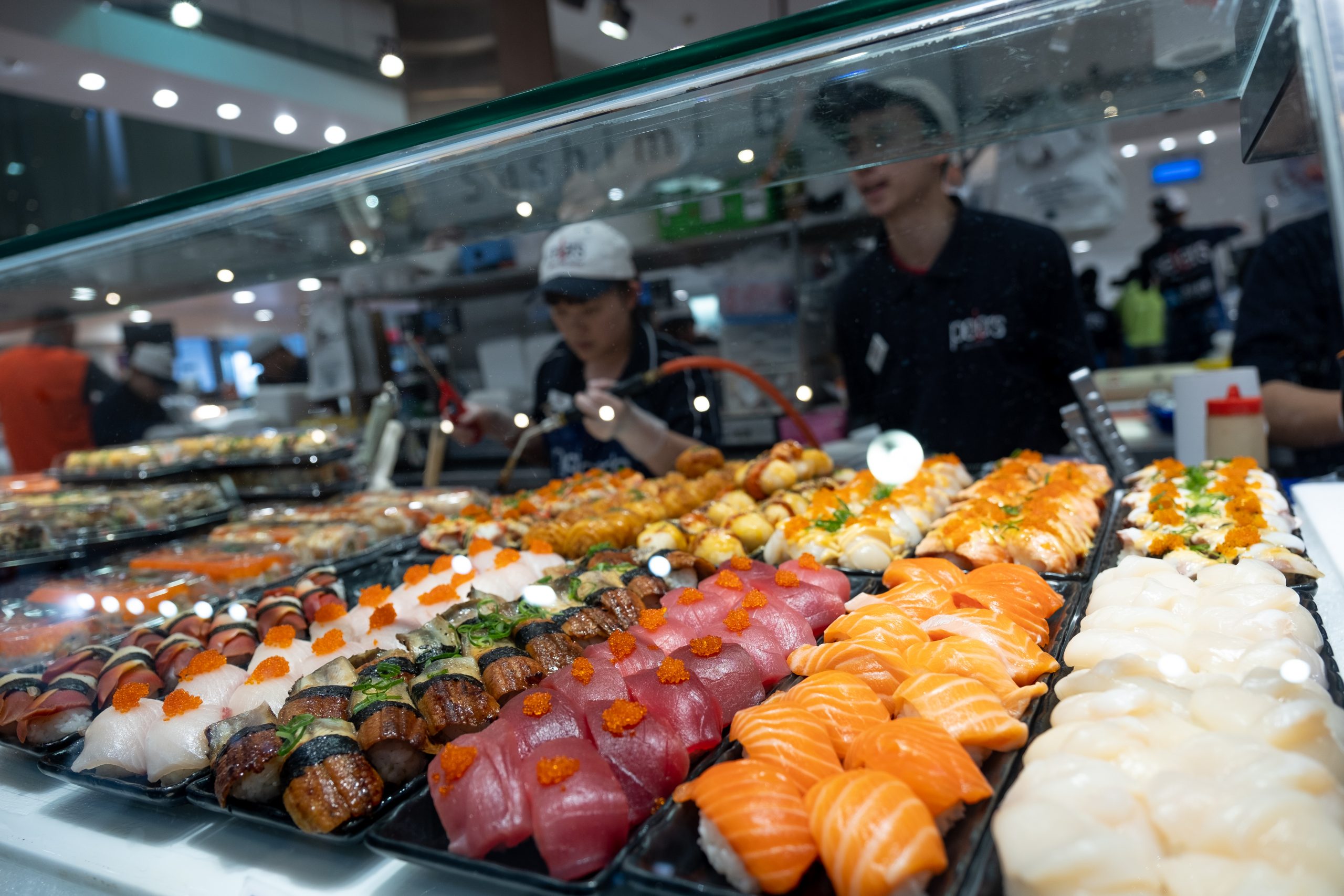 The Sydney Fish market is located in Pyrmonth, just a few kilometers  away from downtown Sydney. The fish market is the largest of its kind in the Southern Hemisphere and it features an array of restaurants, cafes and retail, and a working wharf.

Elaine was really happy that she got to visit this place, as being a pescatarian,  seafood is her luxury form of protein.

The seafood market was crowded when we were there during the week and for a lunch session. We went during pre-covid times, so it was crowded with tour buses and tourists.

Since our final day was an early flight out of Sydney we decided to stay near the Airport.

We chose Rydges Hotel which over looked the runway of the Airport.

Unfortunately, the during this time the airport was no where near as busy as normal operations would have it.

The photograph was a composite of a few planes taking off and masking them into one image in Photoshop.

This airport would be ideal if you were on going for an international flight. As we required to get to the domestic terminal. We had to use Uber to get us to the other side of the Runway. (10 minute trip).

If you found this post useful and entertaining, please consider offering a small donation by clicking the “buy me a coffee” button. I would love you for it and it will encourage me to make more content like this one.